A month or two ago I found myself, completely unexpectedly, crying in public. It was a moment that will remain with me forever and, I imagine, define my course to come. So let me tell you the story…

I was attending the annual Arts Fair hosted by our local council, this year in partnership with 51 artists from 24 countries. The Fair is always a fantastic and quite magical place to visit, with arts and handicrafts not only being displayed but also demonstrated on site; from wood carving to marbling (ebru), weaving to leatherwork… I visited three times during the week and each time came away feeling dazzled, inspired and moved by the craftsmanship, passion and beauty. (Above: Stunning camel bone boxes decorated in miniature by Ayhan Kabaoğlu)

This year, the craft especially in the spotlight was ‘Minyatür’ (Miniature). Miniature originated in Iran as part of the illustrative branch of art forms (tezhip) and was applied on manuscripts and writings to bring a vivid depiction of the textual content. For those who want to know, pictures were drawn with no depth (true perspective) to them (3D becoming 2D) and in tiny form, both so as to fit in the empty spaces left by manuscript scribes for the purpose of illustration, as well as to conform to Islamic regulation of artistic practise: work was to be as far removed from Western realism as possible, for to copy real life was surely to mimic Allah, a terrible blasphemy.

As well as serving purely illustrative ends for fictional tales, however, miniature was also a way of preserving history and collective memory, with illustrations forming part of the documentation of historical events. This was a function of the art form I had certainly never considered, but which was discussed in great length at the two day Miniature Symposium organised to coincide with the opening of the Exhibition.

A good number of Turkish scholars from prestigious universities came to present short lectures (30 minutes) on their area of expertise. I could only attend the first day, but topics ranged from a pictorial study of the life of Sultan Süleyman, to the artistic representation of Manichaeistic religious practice in the region from the 3rd Century!

However, by far the most striking and memorable part of the Symposium was the opening speech given matriarchal legend of the field, Prof Dr Nurhan Atasoy. Now in her 80s, the room fell to a hush as she climbed slowly onto the stage and addressed a room full, effectively, of her artistic children, intellectually poised to receive the wisdom she would share. 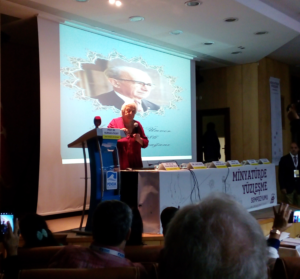 Her first words were of gracious homage to her own mentor and teacher, Suheyl Ünver. Indeed, her first slide showed his picture, framed and embellished, with his birth and death dates in respectful memory. As Dr Atasoy honoured the life of this esteemed professor, she then referred to a phrase of his that she had treasured throughout her life and astounding career.

The words were accredited to the great military hero and reformer of the Turkish nation, Mustafa Kemal Atatürk, and perportedly given in a speech following the 1923 War of Independence that would birth the Turkish Republic:

“The minor battle to defeat the disreputable enemy with all required force and retribution is over. Now the larger battle to destroy ignorance begins.”*

Then Dr Atasoy looked out into the stilled auditorium and proclaimed,

‘This is the battle I have lived my life trying to win. And it is now up to you to continue the battle.’

Maybe it was because she had whisked us to the the front line of war in an instant, or the privilege of being the only Westerner in the room at such an intimate commissioning. Perhaps it was the sight of an elderly woman, pleading for us to continue her unfinished legacy, or the sense of a heart roused to courage at words well spoken. Whatever, it was an awe inspiring behest from a woman who has given her life to fight for artistry, and I had to shed a tear or two as I inwardly accepted her challenge.