I’ve always loved the ‘Kalyon’ or Galleon designs traditionally found in İznik çini and, despite taking photos of other people’s work for years, had yet to do my own. Several years back, whilst going through a rough and turbulent season in my own life, I read a poem about sailors caught in a terrifying storm. The poem said they (on the boat) “reeled and staggered like drunken men, they were at their wit’s end”… In the Turkish translation of the poem, “at their wit’s end” is written (when literally translated back to English) “their mastery was useless..” This sentiment absolutely summed up what I was feeling in my own life. All the skills and ability that had served me until now had been exhausted and empty in the face of this previously unknown storminess. I suspect it’s a feeling many people can relate to. In uncharted waters, feeling out of our depth, beyond rescue and unable to save ourselves. We certainly have the metaphorical language for it in English!

In the poem, the sailors cry out in their distress to God and He ‘brought them to their desired haven’. Regardless of whether we believe in God or the power of prayer, it’s powerful to sit with the sense of relief, beauty and rest that a ‘desired haven’ might conjure up… In the middle of the ‘storm’ I couldn’t even remember what still waters were like, let along the joy and delight of sailing into harbour after many night adrift and beaten by wind and waves. But isn’t that what hope and faith are all about? Being able to believe (whatever we turn to in times of trial to get us there) that somehow, one day, preferably in the not too distant future, things will be better and we will find calm and we will pull into a haven that we have dreamt about from afar.

My piece is a two-tile piece. One piece is a ship having been battered by storm and sea, with the mastery of those on board counting for nothing. The other piece is the boat miraculously restored and brought to safe harbour and home. I suspect at some moments in life the order of these would change. On high seas today? Then the hope is for a haven tomorrow. In a haven right now? Well then, surely some adventure awaits you tomorrow? 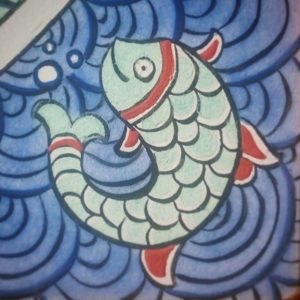 Thinking about it now, I could just as well have drawn the boat in safe harbour as battered looking and weather beaten, the signs of trial adding extra victory to the arrival home… Perhaps a second re-figuring of this idea could be 3 tiles (1: fresh from port, 2: in the storm, 3: safe haven)… What do you think? Is it better to have the boat restored and ready to sail again or windswept yet home with joy and relief?

Regardless, whatever storms you might encounter, may you find safe haven before too long!